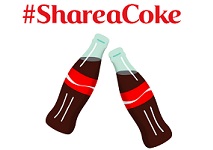 Coca-Cola has become the first company to implement a custom emoji as a form of paid advertising on the social media platform Twitter, according to reports in FoodBev and Adweek.

“Coca-Cola is a massive global partner of Twitter and they have been pushing us for some time on building a custom emoji (along with the creative agency of W+K)”, said Ross Hoffman, senior director of global brand strategy at Twitter. “We can’t speak for what Coca-Cola key metrics are, but what we generally think about for large campaigns like this are engagement, sentiment, adoption of the hashtag/emoji and total reach”.