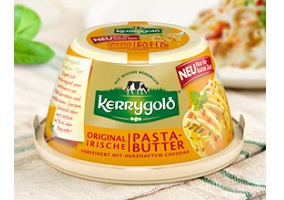 A new version of the Irish butter Kerrygold, especially developed to be used with pasta dishes, is being launched in Germany by Ornua.

Kerrygold Irish Butter For Pasta is described as being flavoured with Irish chedar, bell peppers and a range of Mediterranean herbs including oregano, rosemary, thyme and basil. It is promoted as being easy to use, with the consumer needing to add only a knob of the butter to a dish of cooked pasta. As with all Kerrygold products, it is said to be made with Irish milk and to contain no artificial additives.

According to Ornua, Germans eat pasta on average three times a week and will often add butter to a pasta dish. The company also recommends the butter as a spread for ciabatta.

Kerrygold Irish Butter For Pasta is being made available from October to December 2015.