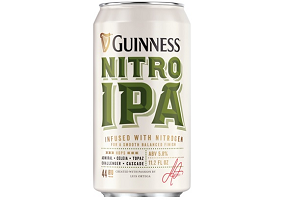 Diageo has announced the launch of a new India Pale Ale (IPA) for the US market that is said to make use of the same nitrogenation technology as its Guinness brand of stout.

Guinness Nitro IPA is claimed to possess balanced flavour and aroma, creamy mouthfeel and a perfectly formed and long-lasting head of dense bubbles. It uses five hop varieties –  Admiral, Celeia and the dry hops namely Challenger, Cascade and Topaz – brewed with Irish barley malt, as well as the Guinness yeast strain used for fermentation, according to the company.

Luis Ortega, who created the beer, explained: “IPAs are complex and hoppy, but for some beer drinkers the bitterness can be too much. We aimed to make a balanced, smooth beer […] There’s plenty of hoppy flavour, with citrus aroma to the fore, but the nitrogen rounds it all out. The mouthfeel is fantastic, and the use of Guinness yeast gives it an echo of the character of our famous stouts”.

Guinness Nitro IPA will be on shelves across the US from September as a six pack of 11.2oz cans.