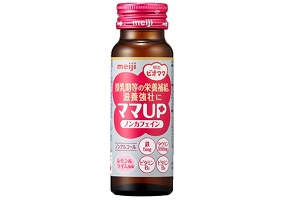 The new drink, called Mama Up, is being made available under the Meiji Bio Mama brand from 20th March.

According to Meiji, Mama Up targets breastfeeding mothers concerned about the potential side effects of conventional energy drinks. Unlike regular products, Mama Up is claimed to be free from caffeine, alcohol and preservatives and is also described as high in iron (5mg per 50ml), taurine (1000mg per 50ml), vitamin B2 and vitamin E6. The product’s lemon & lime makes it easy to drink and provides for a refreshing aftertaste, Meiji adds.