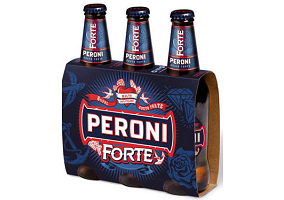 The Italian beer-maker Peroni has launched Peroni Forte, a new product with a higher alcohol content than conventional Peroni beer.

According to Peroni, Peroni Forte is a new segment for the company and has been launched in response to increased demand for higher-alcohol beers in Italy.

With 8% alcohol by volume and a light colour, the new beer is classified as an Imperial Pale Ale and is said to have an “initially sweet flavour which is immediately balanced by a bitter note”.

The product is also promoted as being “as intriguing and charismatic as the night” and bears a design that is aimed at clearly differentiating it from conventional Peroni, according to media reports.

Made from 100% Italian malt, Forte is available across Italy in a single 33cl bottle and as a pack of 3 bottles.