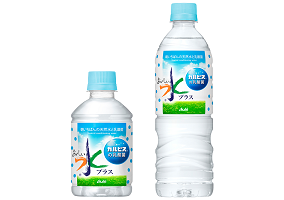 Asahi, the Japanese drinks firm, is to launch a second edition of its Oishi Mizu Plus (Tasty Water Plus) line in collaboration with Calpis, a brand it acquired in 2012.

The new bottled water features the same lactic acid bacteria used in Calpis dairy drinks,  which is claimed to offer natural sweetness and obviate the need for artificial sweeteners. Said to be processed using Asahi’s original “clear water method” to give it its transparent colour, the drink is also said  keep the refreshing yet lightly sweet flavour of Calpis. The pack has been designed to reinforce the idea of hydration and health by incorporating Calpis’ typical pattern of dots.