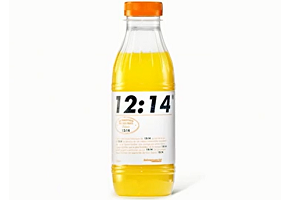 Intermarche is rolling out a new concept for the fresh juice category through the use of branding that tells the consumer the precise time the product was made.

Featuring a predominantly white label, the primary ‘brand’ of the supermarket’s new orange juice is a time stamp in 24-hour format that is said to indicate the exact moment when the juice was pressed and bottled.

Dubbed “le jus le plus frais” (“the freshest juice”), the concept was developed by Intermarche in collaboration with the agency Marcel, which also developed last year’s widely-publicised campaign around ‘ugly fruit and vegetables”. The idea has been piloted in a shop in Issy Les Moulineaux in Paris as a precuroser to a planned wider rollout over the coming months.