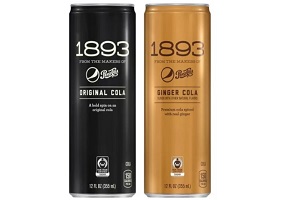 Drinks and snacks multinational PepsiCo has launched new ‘craft’ colas for the US and Canadian markets, according to reports in The Street and Canadian Grocer.

In the USA, the firm has announced the introduction of 1893 Cola and 1893 Ginger Cola. The 12oz cans, which will be available across stores in the USA, are to commemorate the company’s founding year and focus on ‘authentic’ ingredients such as kola nut extract, fair trade sugar and sparkling water.

In Canada, meanwhile, the firm has reportedly embarked on a similar path with the launch of Pepsi Ginger, according to a report in Canadian Grocer. Presented in bronze colour  335ml cans, the product is said to promise “a delicious and unexpected flavour combination, made with real ginger”.