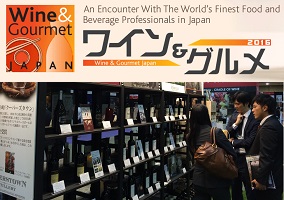 Advertised as “your gateway to the Japanese wine, beer, spirits, gourmet food and foodservice market”, Wine and Gourmet Japan – a recently-established trade event staged by Koelnmesse, the  organisers behind major European shows such as Anuga and ISM – returned to the showgrounds of Tokyo’s Big Sight Exhibition Center for its latest edition.

Visitor numbers for the 2016 event showed a modest increase on the previous year, with a total of 75,845 delegates walking through the doors of Wine & Gourmet and its partner events over the three days of the show. Exhibitor numbers were meanwhile expected to be up on 2015, when 174 companies representing 21 different countries attended to showcase a diverse range of products.

On the show floor itself, there was evidence of determined efforts to reach out to new consumers through more creative product ideas, as well as increasing diversity as buyers embraced offerings from outside the more high-profile wine producing countries.

Read more about Wine & Gourmet Japan in the next issue of Gama News.