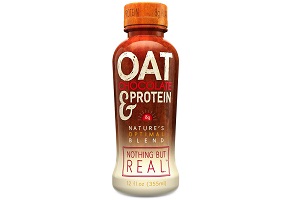 US health food start-up Nothing But Real has announced the launch of its first product: a chocolate flavour drink containing oat and pea protein.

Launching in May, Nothing But Real Oat Chocolate & Protein Drink is described as being made from whole grain oats, lightly sweetened with pure maple syrup. Offering “hunger-busting” benefits, it is claimed to contain “an optimal blend of 8 grams of easily absorbable oat and pea proteins”.

The drink’s founders reportedly spent two years creating a patented process to manufacture a drink free from additives such as carrageenan, gellan gum and processed sugars.

Source: Nothing But Real (via BevNet)