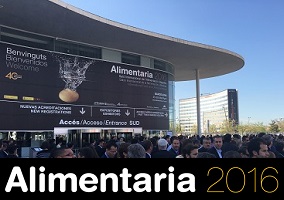 In April, Spain once again became the focal point for the world’s consumer goods firms as Alimentaria returned for its latest edition at Barcelona’s Fira Gran Via. Now into its 40th year, Alimentaria hosted a total of 140,000 visitors from 157 countries (16 more than in 2014), indicating, in the show’s words, “its international pulling power and efficient role at galvanising exports for sector companies”.

Of the 44,000 international visitors, half were from Europe, of which the majority were from France, Italy, the UK, Portugal and the Netherlands, while the second largest geographical source of visitors was the USA, followed by Latin America. Alimentaria also claimed to have invited some 800 “top-level foreign buyer”s – including importers and distributors from Europe, Asia, Latin America and the USA – which was a figure said to be 62% higher in 2014.

Much as at Food and Drink in the UK earlier in April, a tour of the show floor emphasised the extent to which ‘healthy’ snacks, and particular protein-rich snacks based on meat and fish, are emerging as a powerful NPD theme in 2016.

Read more about Alimentaria in the next issue of Gama News.