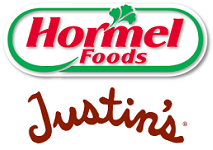 Hormel, the meat and packaged foods company, has announced the acquisition of nut butter firm Justin’s in a deal reported by the Denver Post to be worth $286 million.

Hormel is already active in the nut butter space with the Skippy brand of peanut butter, which it acquired from Unilever in 2013.