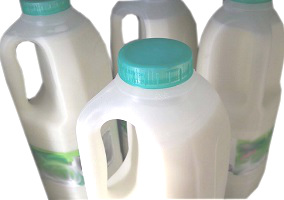 Researchers at the University of California Berkeley and Taiwan’s National Chiao Tung University have developed a milk cap that is claimed to detect spoilage before the milk is poured.

The closure has been made with a 3D printer and, according to Liwei Lin, professor of mechanical engineering at Berkeley, the breakthrough means that one day consumers may be able download files from the internet and print similar packaging devices at home.

“The closure is fitted with a capacitor and an inductor to form a resonant circuit and, when the carton is turned upside down, a small amount of milk is trapped in the cap’s capacitor gap. The circuit is then able to wirelessly detect changes in electrical signal that accompany increased levels of bacteria, and found that after 36 hours of the milk standing unopened at room temperature, the peak vibration frequency of the milk had dropped by 4.3%. During the same time, a refrigerated carton of milk would shift by around 0.12%”.