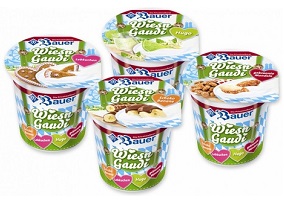 Bavaria-based dairy company Bauer has announced that it is launching four limited edition varieties of yoghurt to celebrate the 2015 Oktoberfest.

Named Wiesn Gaudi, the yogurt is being made avaiable in the flavour Hugo (a German cocktail made with lime and elderflower) as well as varieties based on three well-known Oktoberfest desserts: Sweet Roasted Almonds, Chocolate Banana and Gingerbread Hearts.

The packaging is also said to reflect the Oktoberfest tradition, with designs featuring familiar sights from the event such as the Frauenkirche church and the ‘Wiesn Rad’, the famous ferris wheel from the Oktoberfest site.