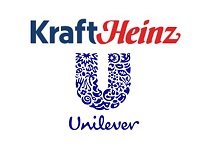 Kraft Heinz, one of the world’s largest food and beverage firms, has offered $143 billion deal to merge with Anglo-Dutch FMCG multinational Unilever.

Unilever has reportedly rejected the deal, saying that the offer of $50 per share undervalued the company. A Kraft Heinz spokesman is meanwhile reported as saying: “We look forwards to working to reach agreement on the terms of a transaction”.

According to recently-released financial statement, Kraft Heinz reported net sales of $26.5 billion in the last financial year, while Unilever’s turnover was $49.6 billion.

Share in both companies climbed on the announcement of the offer, with Unilever’s share price rising more than 10% and Kraft Heinz up 4.6%.

If the deal goes ahead would create a giant in the food industry with a large portfolio of brands across the food, beverage and dairy categories.