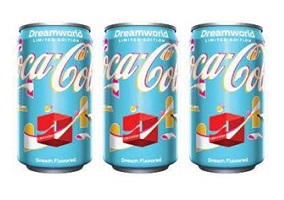 Coca-Cola has announced Dreamworld, the latest offering within its Coca-Cola Creations concept.

According to a company press release, Coca-Cola Dreamworld, which also comes in a zero sugar version, “explores the realms of the surreal, the imaginary, and the otherworldly” offering “a surprising and unexpected flavor from a dream world”.

Commenting on the launch, Alessandra Cascino, creative and shopper programme director of Coca-Cola North America, said: “Coca-Cola Dreamworld taps into Gen Z’s passion for the infinite potential of the mind by exploring what a dream tastes like. Like the Coca-Cola Creations that came before it, Dreamworld plays with the unexpected and will no doubt provoke discovery and debate among consumers…which we welcome”.

“What makes Coca-Cola Creations so special is the simplicity of its ‘first Coca-Cola to…’ promise. Every drop delivers an unexpected, never-before-seen product and experience in an only-Coke-can-do way by tapping into core Gen Z passions and cultural trends,” she added.