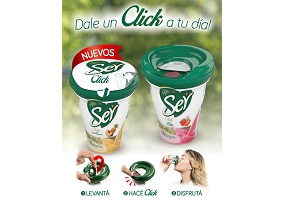 Danone Uruguay, a division of the dairy and drinks multinational Danone, has announced the launch of a new line of yoghurts that uses an unusual pack device to target on the go consumption.

According to Montevideo Portal, the new Ser Click range is exclusively Uruguayan and has been designed to fit “dynamic and modern lifestyles”. The yoghurt cups feature a lid that is opened by lifting a device similar to a drinks can ring pull: once the ring pull ‘clicks’ in place, an aperture is created that allows the product to be consumed on the move. The pack device is promoted with a graphic saying “Lift up, Click, Enjoy”.

Ser Click Yoghurt is on sale in stores and supermarkets throughout Uruguay  in the flavours Strawberries & Cream and Pineapple & Peach.  Each is claimed to contain only 64 calories, 0% fat and no added sugar.