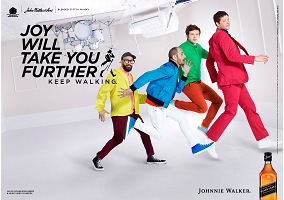 Spirits firm Diageo has announced that it is launching a new global campaign called ‘Joy Will Take You Further’ for its flagship Johnnie Walker Scotch whisky brand.

Described as an evolution of the brand’s ‘Keep Walking’ campaign, ‘Joy Will Take You Further’ is being activated simultaneously in 50 countries with the intention to reach 350 million consumers around the world.

The concept “brings to life the concept that joy can be a catalyst to the progress they seek, and aims to generate a positive culture shift by promoting and encouraging the idea that finding joy in the journey is part of the recipe for success”, the company said in a statement.

The campaign features celebrities from the worlds of sport and entertainment such as Formula One driver Jenson Button, actors Jude Law and Zhao Wei, US rock band OK Go, and Mexican supermodel Montserrat Oliver.

Commenting on the campaign, Diageo chief marketing officer Syl Saller said: “I am hugely excited about the potential of this new campaign to drive Johnnie Walker forward to the next decade of growth. It is rooted in deep consumer insight and tells true stories of people who have truly walked with joy”.