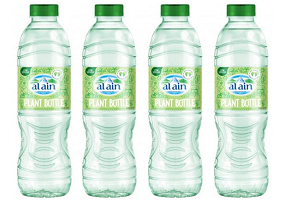 Agthia, the leading Middle East food and beverage firm, has unveiled what is said to be the region’s first drinks bottle made from bioplastic.

The new Plant Bottle for Agthia’s flagship Al Ain mineral water brand is described as being made from fermented sugars that are converted into a resin called polylactic acid. The pack is claimed to be able to withstand high summer temperatures but also to be fully compostable within 80 days.

Commenting on the launch, Agthia Group CEO Tariq Al Wahedi said: “The bottle is environmentally friendly and made of 100 per cent plant-based sources, including the cap”.

“The revolutionary innovation is set to improve the carbon footprint by 60 per cent as compared to other packaging material”, he added.

Agthia is the latest FMCG major to explore the potential of bioplastics as an alternative to conventional polymers. Danone, Nestle Waters and PepsiCo are all part of a grouping called the NaturALL Bottle alliance, which aims to produce bioplastic bottles based on biomass feedstocks. Meanwhile Coca-Cola’s PlantBottle, which has been on the market since 2009, is made from up to 30% sugar cane and other plant materials.