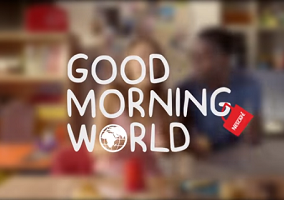 Nestle and Facebook have joined forces to release a ‘360° ‘ advertising video for the Nescafe coffee brand, uniquely available on the social media platform.

As part of a global campaign to connect with Millennial coffee lovers, the “GoodMorningWorld” video for Nescafe  – apparently a first in the FMCG space – allows consumers to customize their viewing experience through the 360° rotation of their mobile phones, using a technology developed by Facebook.

The video shows people from a range of countries during their breakfast routine and features the sountrack ‘Don’t Worry’ by Madcon. It was said to be inspired by the ‘Cup Song’ meme.

Carsten Fredholm, senior vice-president of Nestle’s beverage strategic business unit, commented: “We know our target audience of young coffee lovers pick up their phone at the start of every day looking to be entertained by real experiences. The 360-degree video allows us to be engaging in an innovative way”.

In addition to the new video, Nestle has recently worked with Google to create the app Nescafe 360.