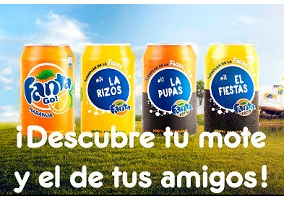 The Spanish arm of multinational beverage firm Coca-Cola is embarking on a campaign that will use ‘nicknames’ to add variety to 100,000 cans of Fanta branded soft drinks, according to a report in Marketing News.

Broadly comparable to Coca-Cola’s previous ‘Share A Coke’ campaign that saw the regular Coca-Cola logo replaced on packs with a choice of more than 1,000 different first names, the new Fanta initiative will enable consumers to choose from packs bearing more than 60 different nicknames, from “La Rizos” to “La Pupas” and “El Fiestas”.

According to Marketing News, the initiative also includes a social media campaign featuring YouTube star El Rubius, an ‘influencer’ with whom the company has previously worked. In addition, consumers will be able to interact through Fanta’s own website and digital channels to customize a digital format for their own can, create their own community at ‘Fauna Fanta’ and win ‘meet & greets’ with ‘Youtubers’ Amangel and Alexby.

The customized packs will be available until September for cans of Fanta Orange, Fanta Lemon and Fanta Zero.