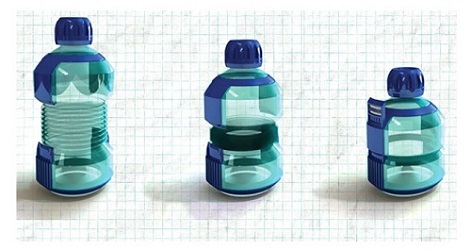 A novel packaging solution could be making a further stride towards retail reality as it is put before a global investment fund, FoodBev reports.

Eco-Clic, designed by Julian Tuesdale of New Zealand, features a collapsible system allowing consumers to squash the bottle and thus reduce its height before they dispose of it. According to Eco-Clic, the bottle will fold down to half of its original size. Once this is done, the consumer will be “rewarded” through a special mechanism on the side of the bottle.

The drinks bottle is described as being compatible with an array of cold drinks including water, milk, juice and carbonates. Meanwhile, the “rewards” to be associated with the bottle are yet to be finalised but could vary from random instant physical prizes and tokens to virtual prizes such as QR codes linking to online deals, according to FoodBev.

Eco-Clic aims to launch the new bottle in 2014.