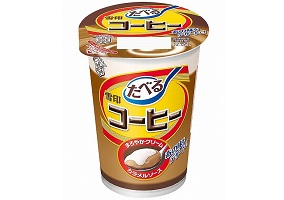 Megmilk Snow Brand, the Japanese dairy firm, has announced the launch of “edible coffee” as an extension to its product range.

The launch is an addition to the Yukijirushi Coffee range, which has been on the market for more than 50 years. The pack design is almost identical to the long-standing coffee drink but instead bears texts saying “to eat” and “the same taste – now as a dessert!”

The new product is described as a “hybrid dessert” and is a result of consumer demand for similar products, the company added. The coffee-flavour products is topped with cream and sits on a caramel sauce.