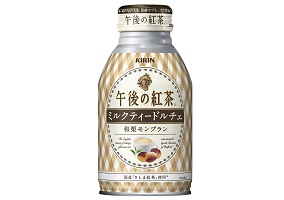 This limited edition is advertised as being made with two types of Japanese origin ingredients to offer flavour and high quality: the first is a black leaf teaf from Sashima in Ibaraki, Japan, that is claimed to have low bitterness and a mild flavour, and the second are chestnuts from Ibaraki that are said to have a gentle sweetness.

Mont Blanc is a popular Japanese dessert, made with chestnut and chestnut paste.

Kirin’s new drink is presented in a 250g bottle can that has a wider spout to deliver more aroma and to maximize indulgence, according to the company. The product is being launched with a suggested retail price of ¥138 ($1.17).