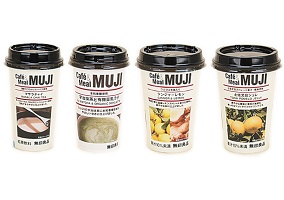 Convenience store chain Family Mart is to start selling four varieties of latte, tea and jelly drinks under the Cafe& Meal MUJI name in what will be the brand’s first foray into chilled drinks.

The brand, first established by Japanese retail firm Ryohin Keikaku in 2014, is claimed to offer products made with simple methods for the best flavour.

The new line, claimed to “maximize the flavour of each of the ingredients”, inlcudes a Masala Chai Tea, said to blend allspice, cardamom and ginger and to have a mild flavour, and An Uji Matcha & Organic Soy Latte that is claimed to be mild and sweet. Completing the line,  Ginger & Lemon and Tosa Pomelo Jelly are both described as “refreshing”, the former containing ginger pieces and the latter said to have a bitter flavour.