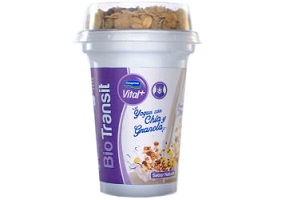 Conaprole, the Uruguayan manufacturer of dairy products, spreads and desserts, has announced a new addition to its product range that combines dairy, cereal and superfood grains.

Conaprole Vital + Bio Transit Yoghurt with Granola & Chia is described as having been developed in response to consumer demand for healthier products.

According to a Portal Montevideo reports, a plain flavoured yoghurt said to help regulate intestinal transit has joined forces with the properties of chia in a product that is claimed to be high in fibre, protein and omega 3. The granola is stored separately from the product in the lid of the pack.

For the launch of the product, the company has released a TV advert featuring five women dancing, with the aim being to develop a ‘fun’ concept that poses the question: “It sounds good to feel good every day, right?”.