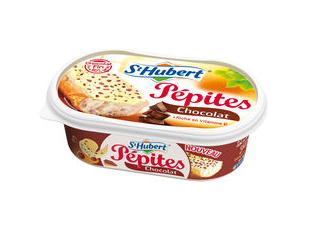 Gama’s innovation focus this week is a product that seeks to take margarine into uncharted waters through sweet flavours – St Hubert Margarine with Chocolate Chips.

Launched in France as an extension to the established St Hubert line of margarines, St Hubert Margarine with Chocolate Chips is an attempt to reposition margarine as a healthy alternative to sweet spreads, particularly targeting the traditional French goûter or afternoon snack. Familiar to many French children – according to figures quoted by LSA, taken by 90% of those between the ages of 9 and 14 – the goûter typically comprises bread eaten together with chocolate or a sweet spread, or alternatively one of many cake and biscuit products now produced by French manufacturers specifically targeting the afternoon snack occasion.

Perhaps identifying a demand for ‘better for you’ options in a segment characterized by high-sugar products, St Hubert is looking to position its chocolate-flavoured margarine as a healthier alternative to conventional chocolate spreads, compared to which it is said to have five times less sugar. To add to the interest, the chocolate chips also provide a textural dimension – not a common feature in margarine, although something St Hubert has itself previously experimented with through the 2011 launch of a margarine containing cereal grains. The texture phenomenon is one that is increasingly permeating food and drinks products, and in the French sweet spreads market has manifested itself through products such as a Gavottes branded chocolate spread containing pieces of the famous crêpe dentelle biscuits.

While margarine may not be the most obvious challenger to the dominance of chocolate spreads, St Hubert may point to the success of another imitator that successfully gained a foothold in the category across Europe. According to industry figures, Mondelez’s Philadelphia with Milka – a chocolate flavour cream cheese – achieved 6.6% value share within the chocolate spreads category in its first two years of launch in Germany, and as a result was later rolled out to other major European markets.

Regardless of whether St Hubert Margarine with Chocolate Chips achieves the same level of success, it should still prove a useful further benchmark for the indulgence trend within the food industry, in particular in categories – such as margarine – where such innovations are not commonly seen.