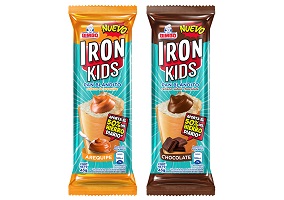 Multinational Mexican bakery firm Grupo Bimbo has announced the launch of a new line of high-iron bread products targeted at children, which is being marketed under the Bimbo Iron Kids brand.

According to La Republica, the product launch is part of the company’s ‘Let’s Talk About Iron’ campaign, which is described as being focused on improving children’s intake of iron in order to prevent diseases such as iron-deficiency anaemia.

The new Bimbo Iron Kids line consists of two varieties of pan blandito (a type of enriched bread) with a choice of Arequipe (Milk Caramel) and Chocolate fillings, sold singly in packs of 45g.

Commenting on the launch, Tatiana Esguerra Rezk, head of sweet bread brands at Bimbo Colombia said: “The company is entering the world of children’s products with a very strong offering in the shape of Iron Kids, a concept that is very much aligned to Bimbo’s philosophy of offering products that are accessible and nutritious, and one which takes into account the 25% deficiency in iron intake among children”.

Grupo Bimbo is said to have invested more than 1000 million COL ($0.35 million) in the new product launch and expects to sell seven million units by the end of the year.