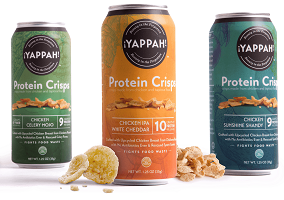 Tyson Foods, one of the world’s largest meat firms, has announced the launch of a new brand called Yappah! in a bid to combat food waste.

Yappah! Protein Crisps are described as being crafted from “rescued” and “upcycled” vegetable and grain-based ingredients that might otherwise go to waste. The brand is the first created by Tyson Innovation Lab, a specially-selected team responsible for developing innovative products.

According to Tyson Fooods, the new crisps are made from “rescued” spent grain from the brewing of Molson Coors beer and “rescued” vegetable puree from juicing, together with “upcycled” Tyson chicken breast.  Advertised as a crispy snack that will appeal to all food lovers, and sold in a fully recyclable metal can, Yappah! Protein Crips are being launched in four “culinary-driven” flavours: Chicken Carrot with Curry Flavour, Chicken Celery with Mojo Flavour, Chicken IPA with White Cheddar Flavour and Chicken with Shandy Beer.

In a statement, Tyson Foods said that the Yappah! brand was designed to be an umbrella for future products and product categories, with a focus on addressing major social and sustainability challenges.

Commenting on the launch, Rizal Hamdallah, head of Tyson Innovation Lab, said: “The ¡Yappah! brand mission is unique, important and far-reaching. The brand was created to inspire people and partners to rethink their relationship to food and how it impacts society. Through this launch, we intend to address global food challenges such as food waste”.

Yappah! Protein Crisps will be available during July in a 90-day pilot at a grocery store in the Chicago area.