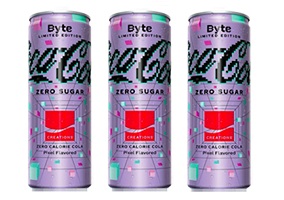 Soft drinks giant Coca-Cola has announced the launch of Coca-Cola Zero Sugar Bite, the second drink from Coca-Cola Creations and the first Coca-Cola flavour born in the metaverse, released to physical retail afterwards.

According to sources, the limited-edition drink will be introduced digitally on an island created in Fortnight Creative and it will be sold in twin packs – one can drink and the other can for collection purposes.

Oana Vlad, senior director of global strategy at Coca-Cola, explained that the team wanted to create an innovative taste inspired by the playfulness of pixels, rooted in the experiences that gaming makes possible, saying that “Coca-Cola Zero Sugar Byte makes the intangible taste of the pixel tangible”.

According to the company, Zero Sugar Bite was firstly introduced in Latin America (on the 4th April 2022), it will be released in the US on the 2nd May 2022 and it will also be available in China on the 23rd May 2022.