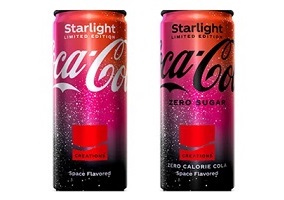 Multinational drinks company, The Coca-Cola Company, has announced the launch of a space-inspired drink, under the Coca-Cola Starlight brand name.

According to the company, the limited-edition series, part of its global innovation platform Coca-Cola Creations, was inspired by ‘the infinite possibilities of space’, and it fuses the signature Coca-Cola flavour with ‘unexpected touches, including a reddish hue and cooling taste sensation evoking the feeling of a journey to space’.

Oana Vlad, Senior Director, Global Brand Strategy, The Coca-Cola Company, said: “It all started by asking ourselves how we could bring the magic and mystery of the cosmos to life, sip by sip, in a quintessentially Coke way. We set out to make the intangible, tangible”.