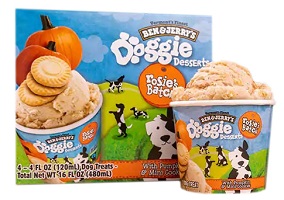 Ben & Jerry’s has developed two frozen desserts specifically designed and formulated for dogs. Made with the same ingredients used by the company in its non-dairy human desserts such as pea protein, coconut oil, and wheat flour with a base of sunflower butter.

“We know our fans love their dogs and treat them like family,” said Ben & Jerry’s global marketing specialist, Lindsay Bumps,  “We created this product line so pups can enjoy something even better than belly rubs. Doggie Desserts are the sweetest treat they’ll ever put their paws on.”