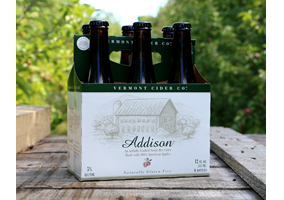 Named after the Addison County where it is produced, Addison Cider is to be offered year-round  and has 5% ABV. Commenting on the launch, Vermont Cider Company director of cider making Ben E Calvi said: “For this flagship cider, we used premium yeasts and longer, cooler fermentations to capture and promote the delicate fresh apple flavors, with no added sugar. Addison is the ideal cider for consumers seeking drier options with strong, authentic roots”.

Meanwhile Wassail Cider is described as a barrel-aged seasonal infused with traditional mulling spices, including vanilla bean, ginger and cinnamon.

Initially only offered in the northeast of the USA, Addison Cider will be available for an RRP of $10.99 in a 12oz (6-pack of bottles) format as well as 16oz can 4-packs. Wassail is available for the same price in the 6-pack format only.

Advertised as the company which “introduced the US to the craft cider category”, Vermont Cider Company owns brands such as Woodchuck, Gumption and Wyder’s Cider, and also imports the UK brands Magners and Blackthorn.