USA: Starbucks to partner with Danone on new smoothie line 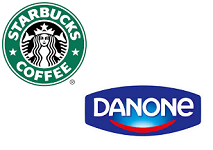 Starbucks is to start selling an exclusive smoothie line in 4,300 outlets across the US through a partnership with the dairy giant Danone, according to a report in 4-Traders.

The new product will reportedly feature Starbucks’s Evolution Fresh Juice blended with a Dannon Greek yoghurt and will be sold at shops in Washington State, Oregon, Alaska, Northern California and Idaho.

Priced at $5.95 for a 16-ounce size, the smoothies will come in three flavours and will be customizable by adding ingredients such as protein powder and fresh kale, Jeff Hansberry, president of Starbucks’ Evolution Fresh brand, is reported as saying.

The Greek yogurt partnership will also include yoghurt parfaits and ready-to-eat yoghurt to be made avaialble in retail channels: In early May, Starbucks and Dannon will begin selling Evolution Fresh Greek yogurt parfaits in about half of Starbucks’ US stores. Later, the two firms will also roll out a range of layered Greek yoghurts in US supermarkets.