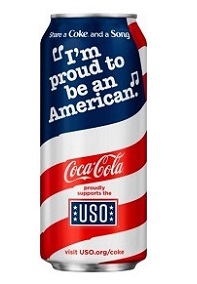 Soft drinks multinational Coca-Cola has released a limited edition of its can featuring the American flag to commemorate the 75th anniversary of the United Service Organizations (USO), according to reports in Business Insider and CNN.

The US-based firm has rolled out the new design in red, blue and white and also featuring the patriotic song lyric “I’m proud to be American”, as part of the ongoing “Share a Coke and Song” campaign launched last April.

According to Erika von Heiland Strader, director of community marketing atCoca-Cola North America: “The patriotic graphics on special 16-ounces can and multiple club packs are a small way of saying thanks to the USO for all they do”.

The new design is offered in 12oz and 16oz cans and they will be available in stores from 4th July.