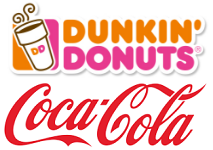 Soft drinks giant Coca-Cola and coffee and doughnut chain Dunkin’ Brands are set to team up to launch a Dunkin’ Donuts branded ready to drink coffee early in 2017, according to articles in Food Business News and the Wall St Journal.

Under the terms of the deal, Coca-Cola will manufacture, distribute and sell the product, making use of its US milk production facilities through its Fairlife dairy joint venture, according to a Wall St Journal source.

Commenting on the deal, Dunkin’ Brands chairman and CEO Nigel Travis said: “We are delighted to be working with The Coca-Cola Co., a world-class partner that will provide us with world-class consumer access, by bringing ready-to-drink Dunkin’ Donuts coffee to the refrigerator cases of grocery, convenience stores and mass merchandisers, as well as inside Dunkin’ Donuts restaurants, across the United States. This new product introduction will increase consumption of Dunkin’ Donuts coffee and increase our brand relevance with existing and new consumers, including many younger customers, which we believe will in turn, drive incremental visits to our restaurants”.

The move is reportedly aimed at competing with the leading Starbucks Frappuccino brand, which is a joint venture between the Seattle-based coffee chain and Coca-Cola rival PepsiCo.

Coca-Cola and Dunkin’ Brands have previously worked together to serve Coca-Cola soft drinks at Dunkin’ Donuts restaurants in the US and selected international markets.