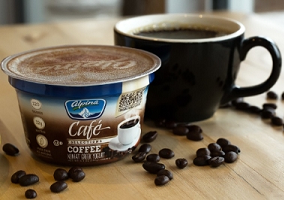 Alpina has announced the launch of what it claims is the first ever line of yoghurt infused with coffee.

Called Alpina Cafe Selections, the line contains real Colombian coffee, “not just coffee flavouring found in the dairy aisle”. It also includes protein and caffeine and contains 120 calorie per cup which “provides a great option for breakfast or an afternoon snack”.

According to Gustavo Badino, Alpina Foods’ general manager: “Thirty-four percent of Americans drinks coffee, higher than soda consumption. We are always looking to innovate in the dairy aisle. Once we found a recipe that tasted just like the consumer’s favourite flavour and were able to include actual Colombian coffee, we knew we had a unique product the consumer would want and enjoy”.

Alpina Cafe Selections contain 12 g of protein, 0 g of fat and 30-50 mg of caffeine, the equivalent to about half a cup of coffee, the company added.