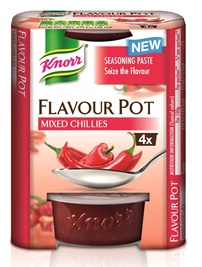 Unilever is extending its range of seasoning products with the launch of a new Knorr Flavour Pots range, FDIN reports.

Commenting on the launch, Vanni Cataldi, brand manager for Knorr at Unilever UK said:  “This is the first time that Knorr has ventured into the Herbs and Spices category and we are confident that the launch of Knorr Flavour Pots will bring additional growth to the market by encouraging dried herb users to trade up, as well as attracting Stock Pot users into Herbs and Spices with a format they recognise and love.”

He continued: “Knorr Stock Pots had a massive impact on the market when we launched them in 2008, helping to grow an already mature sector by 27% in value between January 2008 and December 2010, with three-quarters of this growth being purely incremental.”