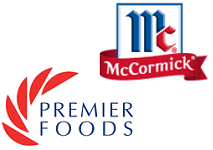 Having previously rebuffed an approach by US firm McCormick, UK food manufacturer Premier Foods has announced that it is now in “constructive” talks with the spice and seasonings giant over a possible takeover deal.

In an update posted on the firm’s website, Premier Foods said that it had arranged to meet its main institutional investors “to provide them with further insight into the business, including the value creation potential of the Company’s new strategic initiatives, and to engage with them more generally”.

The company said that its senior management team had made detailed presentations to McCormick’s senior team regarding Premier’s business and, in particular, the value creation potential of previously outlined strategic initiatives.

The latest offer put forward by McCormick amounts to 65 pence a share in cash, or a total valuation of £1.5 billion ($2.2 billion).