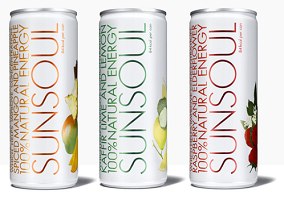 JMS Drinks has announced the launch of Sunsoul, promoted as the company’s first low-calorie energy drink aimed at women.

Sunsoul 100% Natural Energy Drink comes in a choice of Kaffir Lime & Lemon, Raspberry & Elderflower and Spiced Mango & Pineapple varieties and is claimed to be free of artificial vitamins, taurine and refined sugar. Instead the product is described as containing guarana, kola nut and baobab that is claimed to give consumers a steady release of energy.

Jonnie Shearer, founder and CEO of JMS Drinks, said: “We’ve always delivered 100% natural products, that’s at the heart of our vision. With Sunsoul, we decided to take it a step further by getting the lowest levels of both sugar and calories while keeping the drink 100% natural; and of course to get the best tasting energy drink on the market!”.