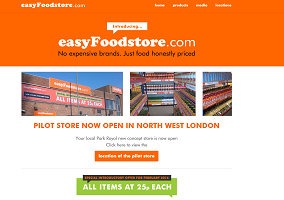 EasyGroup, the firm behind the EasyJet airline company, has announced the opening of a pilot discount grocery store in London, UK, according to a report in Talking Retail.

Opening in London Park Royal, EasyFoodstore will offer a “limited and basic range of items at rock-bottom prices” according to a company spokesperson, with the aim of tapping into the succesful discount concept of German chains Aldi and Lidl.

During its first month of opening in February, the store will provide an introductory offering, including ready meals, pizza, pasta, biscuits and rice,  at a promotional price of 25p.

Commenting on the launch, EasyGroup founder Sir Stelios Haji-Ioannou commented: “This is another way the easy brand can serve the less well-off. Given my experience in distributing food for free in Greece and Cyprus, this is a more commercial attempt to sell basic food for 25p per item to those less well-off in the Park Royal area”.