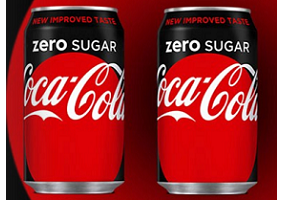 Soft drinks giant Coca-Cola has announced that it is to relaunch Coca-Cola Zero in the UK as Coca-Cola Zero Sugar as a part of a “strategy to help people reduce their sugar intake”.

Announcing the move in a press release, Coca-Cola said that Coca-Cola Zero Sugar would “taste even more like the original Coca-Cola (Coca-Cola Classic), but without sugar” and would be supported by a multi-million pound marketing campaign “designed to get more people to choose no sugar”.

The new name was chosen following consumer research which showed that 5 in 10 people did not know Coca-Cola Zero contained no sugar, the company said, adding that Coca-Cola Zero Sugar would also have a new look in line with the company’s ‘One Brand’ marketing strategy.

Commenting on the move, Coca-Cola Great Britain General Manager Jon Woods said: “For years we have offered people a choice – every brand we sell has a great tasting no sugar version.  Since 2012 our commercial strategy has focused on accelerating the growth of our no sugar options. We know that millions of people love the taste of Coca-Cola and have been working to refine the recipe of Coca-Cola Zero to match the taste of the original, but without sugar. It’s the biggest investment we’ve made in a new product launch for a decade and will give people the great taste of Coca-Cola Classic but without the sugar”.

The move comes after the announcement in March that the UK government intended to place a levy on soft drinks containing more than 5g of sugar per 100ml.