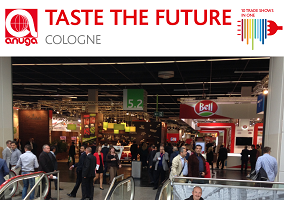 A long weekend in early October saw the return of Anuga – a key two-yearly gathering for the global food & drinks industry – to the city of Cologne in Germany. Space was at a premium as the “fully booked” pavilions of the city’s extensive Koelnmesse showgrounds once again played host to tens of thousands of trade visitors from across the globe, each keen to explore the latest industry news, new product activity and innovation trends.

Seeking to emphasise its scale and diversity, for 2015 Anuga chose to promote itself as “10 trade shows in one”. This meant that, while a large section of the show was allocated to companies broadly classified as “fine food” – gourmet and deli products and general foods – there was also substantial floorspace given over to frozen food, meat, dairy, drinks, bakery & hot beverages and frozen food, as well as dedicated sections for organic products, chilled & fresh food, foodservice and retail technology.

The scale and diversity of the show meant that while a few broad trends were in evidence – such as ‘snacking’ and convenience – the innovation picture was a little clearer at the industry or category level. In this regard, the impact of meat-free diets, a focus on ambient meals and snacks and the continued influence of coconut in the drinks space were among the more notable themes to emerge.

Read more about Anuga in the next issue of Gama News.