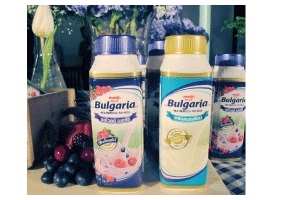 CP Meiji, one of the largest manufacturers and distributors of dairy products in Thailand, is launching a new yoghurt drink for the market in Thailand, according to a report in in NNA.

The new Meiji Bulgaria Yoghurt Drink, which launches this month in the varieties Low Sugar Mild Flavour and Wild Berry Flavour, is described as being targeted at the over 25, health conscious market. According to NNA, CP Meiji is looking to expand its share in the yoghurt drink category from 2% to 18% over the coming year in a bid to dent rival Dutch-Mill’s 95% share of the market.

Packaged in 140ml bottles, Meiji Bulgaria Yoghurt Drink will be available in 7-Eleven stores from the 14th January for a retail price of 20 TBH ($0.55). 500,000 samples of the new product will be distributed as part of a promotional campaign.