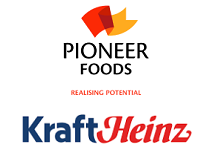 Pioneer Foods, a leading South African food manufacturer, has announced that it has agreed a deal whereby it will acquire the outstanding shares in its joint venture with Heinz Foods Proprietary SA, a subsidiary of the US food giant Kraft Heinz, for an undisclosed sum.

As a result of the deal, Heinz Foods South Africa will become a wholly owned subsidiary of Pioneer Foods. In addition, Pioneer Foods said it would enter into a two-year agreement with Kraft Heinz through which it would manufacture and distribute Heinz tomato ketchup products in South Africa.

Commenting on the deal, Pioneer Foods CEO Tertius Carstens said: “By acquiring full ownership of Heinz Foods SA, we look forward to the further growth and development of the portfolio that includes a range of number one or two brands in their respective categories”.