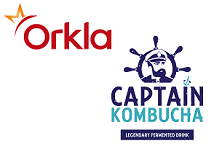 Norwegian company Orkla has announced a 43.5% investment in Portuguese firm Asteriscos e Reticencias, a manufacturer of fermented tea-based health drinks under the brand Captain Kombucha, for an undisclosed sum.

Captain Kombucha was established in 2016 and is currently majority owned by its two founders, with the German firm Doehler Ventures also having a 15% stake. Promoted as “a delicious naturally fermented drink, handcrafted to perfection”, it is also advertised as a raw, vegan and gluten free product that is high in antioxidants and enzymes.