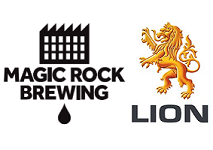 Lion, the Australian food and drinks firm owned by Kirin, has continued its recent spate of acquisitions with the purchase of UK craft beer maker Magic Rock Brewing.

Founded in 2011 in Huddersfield, Yorkshire, Magic Rock Brewing produces a range of beers describd as being “inspired by local brewing traditions and the vibrant US craft beer scene”. The firm’s volumes are said to have tripled since it moved to a new brewery in 2015, and the firm’s production currently stands at around 15,500 hectolitres per annum.

Magic Rock Brewing, which currently exports to 25 countries, said it saw the deal as an opportunity to further expand distribution internationally.

Commenting on the acquisition, Lion Global Markets managing director Matt Tapper said: “Magic Rock has been one the pioneers in the UK craft beer scene and has built a loyal following due to its relentless pursuit of authenticity and quality. We’re excited to have the opportunity to help Richard and the team build on their success. Lion has a long and proud history in craft beer in Australia and New Zealand and we see some great opportunities to help put Magic Rock into the hands of more beer lovers”.