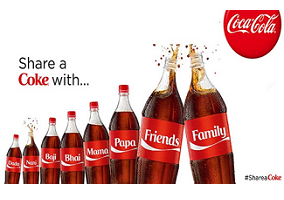 Coca-Cola has announced that it is extending its ‘Share a Coke’ campaign to Pakistan with a new variation on the theme for the Muslim holy month of Ramadan.

As with previous ‘Share A Coke’ campaigns, the strategy is  aimed at personalizing the Coca-Cola sharing experience by swapping logos on bottles for names of friends or relations. In the case of Pakistan, the ‘Share a Coke’ campaign will see 500ml, 1L and 1.5L bottles altered to bear 20 of the nation’s most popular relationship terms including Abu (father), Dost (friend), Mama (uncle), Nani (granny), Nana (grandfather), Ammi (mother), Amma (grandmother), Bhai (brother) and Apa (elder sister).

In the Middle East, meanwhile, Coca-Cola’s latest Ramadan marketing is based on ‘removing labels’, reportedly designed to encourage consumers not to judge one another based on appearances. A limited-edition run of red Coca-Cola cans is to feature the brand’s white dynamic ribbon, but not its signature scripted logo.  On the reverse of the can, the message: “Labels are for cans, not people” is printed.