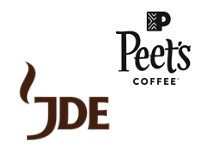 Jacob’s Douwe Egberts, the leading coffee firm (formed from the merger of the Mondelez International and D.E Master Blenders 1753 businesses in 2014), and US speciality coffee firm Peet’s Coffee, are to be merged ahead of a potential IPO of the combined business in 2020.

The exploration of an IPO is said to be a key milestone in the partnership between Acorn Holdings (which includes JAB, the controlling shareholder in both JDE and Peet’s Coffee, as well as BDT Capital) and Mondelez International.

Named JDE Peet’s, the merged business will be present in more than 140 countries and have revenues of approximately €7 billion ($7.9 billion). Its portfolio will include global brands L’Or, Jacobs Coffee, Douwe Egberts, Senseo, Tassimo, Moccona, Kenco, Pickwick and Pilao, as well as Peet’s, described as the leading super premium brand in the USA.

Commenting on the merger, Olivier Goudet, chairman of both JDE and Peet’s Coffee, said: “We are proud of what we have accomplished at JDE and Peet’s but believe with our IPO the best years of growth and shareholder value creation are ahead of us with our newly combined company”.

JAB is expected to remain the controlling shareholder on completion of the IPO.