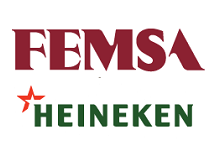 Mexican beverage company FEMSA has announced the sale of a 5.24% stake in beer firm Heineken.

FEMSA’s CEO Carlos Salazar Lomelin said: “We have long held a very positive view of Heineken as a long-term investment. The transaction priced today does not represent or reflect a change in our view or expectations”.

Following the sale, L’Arche Green NV, the company through which Heineken exercises control of Heineken Holding NV, announced that it intended to purchase the Heineken Holding NV shares sold by FEMSA for an amount of €200 million ($239 million).